This morning, seconds after my son and I left our house, we were hit by a sudden downpour.  We laughed about it, walked as quickly as we could to his school, and arrived just as the hail started coming down.  We laughed as we got in; despite having umbrellas, we were both soaked up to our thighs.  The wind had blown the rain so hard in our direction that it was as though we had been wading through a stream.

I helped him into his classroom, changed his clothes, and ran back home to change my clothes and get him a different pair of shoes.  When I realized that if I wanted to stay dry, I’d need to drive, I drove the half block to his school. I waved at the security guard, brought in his other shoes, and then drove a few blocks to park closer to my favorite coffee shop.

As a white woman, I walk in privilege every day.  I have all of my life.  However, I didn’t fully understand what this meant until I read the book White Fragility by Robin DiAngelo.  This is one of those rare books that I listened to on Audible and then purchased the physical copy of.

If you are white, you should read this book.  Below are the reasons why.

For me, this book was a call to action.  I hope you’ll join me in reading it, talking about it, and being open to learning more. 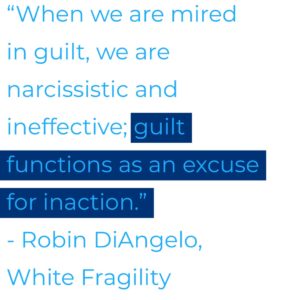